We’re living in an interesting time right now. While some things are just plain awful, there are some things that are definitely cool. For one thing, last year Disney launched it’s reboot of DuckTales.

This reboot is an improvement over the original in several ways, not the least of which is that the reboot includes the return of this guy: Donald Duck.

Not only is Donald part of the main cast (as he should have been from the get-go – Carl Barks’ original comics series has always focused on Scrooge, the nephews and Donald), but he’s back as his old slapstick-y self, engaging in the wacky cartoon hijinks that made him famous. Viz…

Having Donald around as a main character fits in to the new DuckTales perfectly. I even have an easier time accepting supporting characters such as Launchpad McQuack and Fenton Crackshell (Gizmoduck) this time around, because here they’re not serving as stand-ins for Donald.

Then on the Warner Brothers side, we have New Looney Tunes (formerly known as Wabbit! here in the U.S.) with it’s new old take on Daffy. 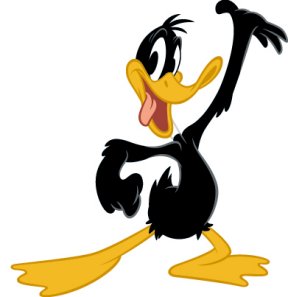 Here. in the States, we have to watch the series on Boomerang’s online streaming service because Turner doesn’t air the show on Boomerang U.S. for some unfathomable reason. Anyway, in New Looney Tunes, Daffy is back to being certifiably insane rather than Bugs’ greedy, jealous rival. Take a look:

I don’t need to elaborate on this much, since Damon has already covered New Looney Tunes and it’s take on Daffy both here and here. So basically, I’m going to echo what he said (and not for the first time): While I like the selfish, greedy, egotistical version of Daffy OK for the most part, the above has always been the version of the little black duck that I’ve always preferred, and this version was long overdue for a return. I sincerely hope that crazy Daffy sticks around for a while for future Looney Tunes projects, as this version of Daffy has been sorely missed.

Yes, it’s definitely a good time to be a fan of cartoon ducks. Hit it!