“When you wish upon a star/Makes no difference who you are…as long as you fly our airlines, save up for Disney Fun Bucks, stay at the Grand Floridian, visit all of our attractions and buy all of our stuff!”

No, not that one.

Today’s Toon Adjacent is all about the now defunct Happy Land of Hanna-Barbera, which was located in Kings Island amusement park, formerly Kings Dominion, in Virginia.

“There’s only room for one kingdom on this planet, folks. Trust me, our lawyers aren’t so enchanted!”

First, a little history: In 1966, Taft Broadcasting acquired Hanna-Barbera Productions for $12 million and they were looking for ways to capitalize. So when Gary Wachs (VP Cincinnati’s Coney Island) approached them, it became apparent to Taft Executives that this would be a highly successful way to cross-promote the licensing. Taft agreed to partner and build Kings Island with the intent of using HB theming throughout the park. Once the purchase of Coney Island was secured in 1969, Taft immediately added costumed HB characters to the Coney Island midway (the “Banana Splits” even filmed their second season montage at Coney Island) and enlisted their team of designers (many of which had come from Disney’s Animation Studios) to help design a themed kids area for the new park.

The entrance to it is arced by a rainbow, and I like rainbows, so that’s kind of cool. Plus, dig that hippy-dippy font.

They’re hot, they’re moist and they’re spoiling for a hug. Have fun.

For the park’s second season, more theming elements and re-paints to rides help spiff up the area a bit. Props designed and created by HB studios – such as fiberglass characters and an animated snail in front of the “Enchanted Voyage” – helped improve upon the theming from the opening season. Following 1973, “The Happy Land of Hanna-Barbera” actually remained relatively untouched for a decade with the exceptions being cosmetic changes to the façade of the “Enchanted Voyage”, the addition of “Boulder Bumpers” (a Flintstones-themed bumper car attraction added in 1978) and the re-theming of the “Scooby Doo” coaster to “The Beastie.” 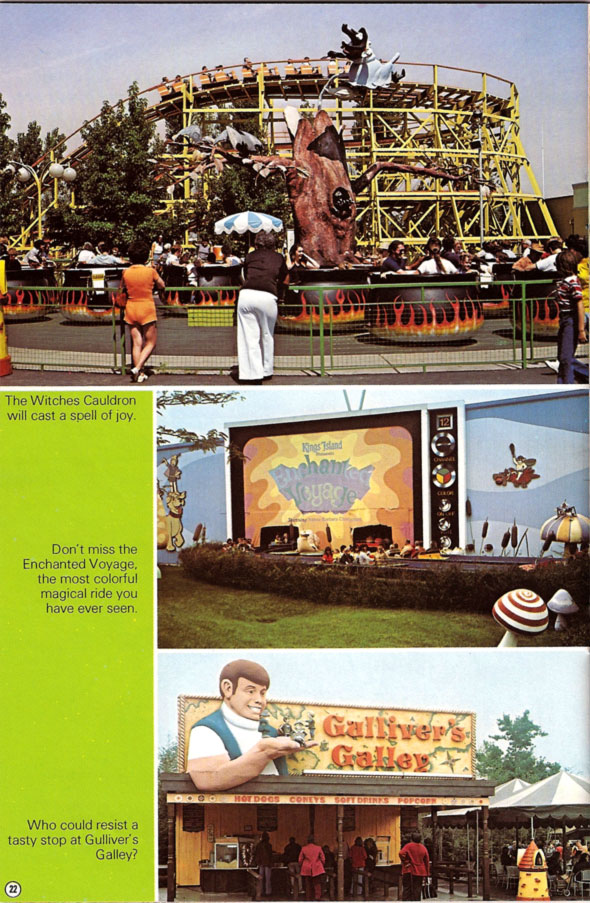 Come to Gulliver’s Galley and play the wondrous game, Stomp-A-Lilliputian.

In 1982, (the 25th anniversary of Hanna-Barbera Studios and the 10th anniversary of Kings Island) the park spent $2.1 million to remodel and update. Re-branded “Hanna-Barbera Land”, the themed section increased its land space by 50 percent adding 20 new rides and participatory attractions. Among the new features were: “Shaggy’s Silly Sticks (an elaborate climbing structure), “Fools House” (a walk-through fun house), “The Hanna Barbera Carousel (a merry-go-round featuring HB icons) and “Scooby Choo” (a miniature railroad).

In addition, a brand-new interactive blue elephant fountain and “The Puppet Tree” (a marionette/puppet theater) were added. Finally, the station for the Von Roll Swiss Skyride (which had been removed two years prior) was converted to the “Hanna-Barbera Shop.” Both William Hanna and Joseph Barbera attended the opening festivities of the “new” land on April 19, 1982 along with over 100 elementary-aged kids.

Just two years later, in 1984, the park entered into a $1 million licensing deal to bring the immensely popular “Smurfs” to the park. (The Smurfs aren’t original creations of Hanna-Barbera, but H-B produced the Smurfs Saturday morning TV series, so there ya go.) Papa Smurf, Brainy Smurf and Smurfette began roaming the midway and the “Enchanted Voyage” was re-themed to “Smurf’s Enchanted Voyage.”

When the Smurfs performed their own rendition of “I’m Blue” by Eiffel 65, I cried…mainly because they locked the door to the exit.

However, the most significant Smurf-themed addition to Kings Island was not a ride at all. It was actually the renowned “Smurf” blue ice cream – a tasty blueberry flavored sweet that has become a staple of the park. It was a runaway hit and remains, to this very day, Kings Island’s most popular treat (although now simply called Blue Ice Cream). 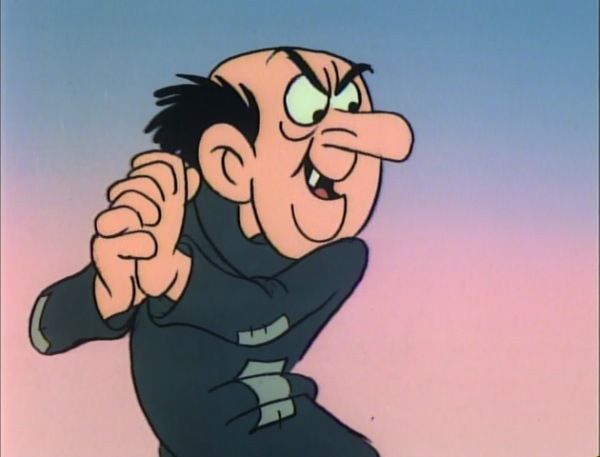 “Don’t get too excited, it’s not made with ground-up Smurf guts. What a letdown!”

The Smurfs called Kings Island home through the 1991 season, but when their popularity dipped they were phased out. It was also at this time that the ever-popular “Enchanted Voyage” (still themed to Smurfs) bid farewell to Kings Island. A beloved original staple of the park, the ride was in desperate need of updating. Upon its closure, the attraction was modernized and converted to “Phantom Theater.” The park utilized part of the original “Voyage” show building and land to create the “Hanna-Barbera Theater” and install the “Scooby Zoom” coaster (currently named “Great Pumpkin Coaster”). “Dick Dastardly’s BiPlanes were also added and, after 20 years of service, Winnie Witch’s Cauldrons were retired and replaced with “Pixie and Dixie’s Swingset”.

In 1998, Hanna-Barbera Land received its final facelift. The park bid farewell to the familiar rainbow entrance arch which had existed in various forms since the opening season… 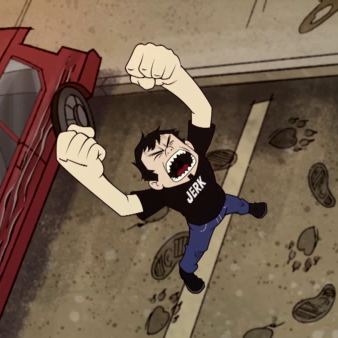 …And they repainted, relocated or re-named virtually every existing HB ride. Three new rides were added including “Yogi’s Sky Tours”, “Atom Ant Skyway” and “Scooby’s Ghoster Coaster.” A first of its kind, “Scooby’s Ghoster Coaster” was a suspended single-rail coaster which featured an elevator lift that took bat-shaped cars (holding one adult and one child) on a flight over the area!

In 1995 a “Nickelodeon Splat City” themed area had been introduced at the park and took the location of the former HB Marathon (Sunshine) Turnpike ride. This infiltration of immensely popular, and current television cartoon characters would eventually outshine the dated HB theme. Yogi, Fred Flintstone and Huckleberry Hound, still ingrained into adults who had grown up with them, were now seen as outdated and unpopular with new generations. In 2001, a Nickelodeon expansion would prompt more loss to the HB theming, and by 2006 the Hanna-Barbera theming would be discontinued and removed from the park altogether. Even the “Beastie” coaster would receive Nickelodeon branding.

This signified a definitive end of an era for the park, Hanna-Barbera, and the guests that had enjoyed the kids’ area for 32 years.

The Nickelodeon theming would only last for another four years. In 2010, the entire kids’ area was re-imagined with the wholesome, and long popular Peanuts characters. All kid’s area rides and attractions would receive new themes with names based on Charles Schulz’s characters Charlie Brown, Snoopy, Linus, Lucy and more.

Peanuts? Really? I get that those characters are popular, but Charlie Brown and company are such a weird choice to build a theme park around. Have you ever read Peanuts? It’s one of the talkiest, moodiest and most borderline depressing comics strips ever written. Those kids are never happy; they spend most of their time parading their neuroses around…constant failure, battling one’s inner demons and unrequited love don’t exactly scream ‘fun times at the park’.

The Happy Land of Hanna-Barbera lasted from 1972 to 2005. Hanna-Barbera isn’t everybody’s cup of tea: they tended to recycle a lot of their concepts, premises and characters, also they pioneered the art of ‘limited animation’, but who says that only Disney can have their own designated amusement nation?

My family and I actually visited the Happy Land of Hanna-Barbera back in the ancient 1970’s, back when Kings Island was still called Kings Dominion, and we got our picture taken with Drooper of the Banana Splits. (He’s no Bingo, but he’s still a Banana Split, dangit!) after Huckleberry Hound ran away from us. Some mascots are just touchy about blowtorches, I guess. I’ve always been more of a Looney Tunes fan, but I’ve enjoyed some of H-B’s output, and I’m OK with lands full of colorful characters which manufacture happiness, so hats off to the Happy Land!