As you’ve undoubtedly noticed, we’re experiencing a bit of a down time here lately. It’s not that we’re burned out, it’s just that right now there’s not a whole lot going on in the world of animation that’s really grabbed us enough to want to blog about it. During this little sabbatical, we’ve been kicking the idea nut around and are in the process of developing possible new segments for Twinsanity. 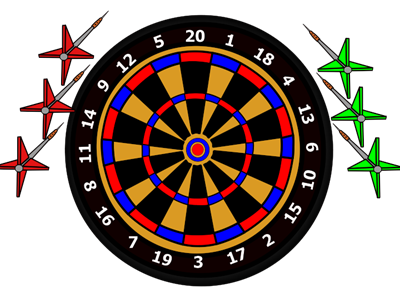 We’re throwing stuff at a dart board and seeing what sticks.

No, this doesn’t mean that the other regular segments like Ad Nausea, Beyond the Background, The Cartoon Couch et al are done; they will continue, just at the moment we haven’t been inspired to do any new installments of them lately. The only segments we’re actively trying to avoid doing are the Highly Opinionated segments; we’re trying to move away from the ranting posts, and we’re no longer doing the 2 Funny, Toons & Tunes or musical Nerdvana segments as actual posts; they will only be used as fillers, placeholders and buffers to separate 2 installments of the same segment like they were originally intended to be.

The What the Funny and Pop Dream segments are an indicator of what to expect with the new material we’re working on: these new segments will be more reminiscent of those in that they will be more detailed and will focus on one specific subject and will extend across multiple posts as opposed to just being one-offs done in a ‘grab bag’ fashion like the Cartoon Country, The Retro Bin and the like are. At this stage I’d actually prefer doing ongoing multiple blog posts, since that will keep us working on something for a weeks, possibly months to come.

(Speaking of Pop Dream and What the Funny, there will be more of these segments; it’s just that we’ve only recently finished the first installments of those and we’d rather not start the next set so soon afterwards. We’d prefer to do something else first. Part of what makes those segments special is that you don’t see them all the time. We don’t wish to get burned out on them.)

Now, onto the new stuff currently in development. Keep in mind that all of these ideas are extremely early, and they could go through a number of changes before reaching their final forms. Also, none of these new bits are named yet; we’ll just be giving them working names for the sake of calling them something. Names are a tricky thing right now since the segments themselves are still being developed, so they too are subject to change. Also, the overall theme of Twinsanity isn’t going to change; Twinsanity’s central focus is, always was and always will be cartoons, comedy and geek culture. Got it? Good.

The first new segment I’m working on was originally going to be a Videots listing my favorite Sonic the Hedgehog Zones; I may still do that at some point, but I’ve already done a favorite stages post in early February, and as much as I enjoy doing those, I don’t want to get into a rut with them. A while later James Rolfe and Mike Mattei did a James and Mike Mondays on Knuckles Chaotix…

...So for a while I was considering doing something along those lines. Then while researching for that, I began reading up on general Sonic lore and considered doing a piece on Knothole (or a place which resembled it; which I also still may do at some stage), and that evolved into a general overview of a planet similar to Mobius. Then finally, I decided to make a series of segments set in a Utopian future. It would depict day-to-day life in an amazing, wonderful high-tech future complete with spaceships, flying cars, robots, aliens and the like. This segment will combine some elements of “Superhero City: A Visitor’s Guide” and “The Future Rocks!” and will feature places and things mentioned in both of those, but will go in greater detail and unlike “Superhero City” and “A Touch of Magix”, these entries will  more closely resemble a narrative structure rather than just being travelogues and will star actual characters for the readers to experience these things through. Right now I’m calling this segment Startopia, Startropolis or Coolopolis.

I’m also working on something akin to Tony Goldmark’s State of the Parks vlogs or Allison Pregler’s Movie Nights or Bob Chipman’s G.E.M.s (Good Enough Movies), but for cartoons, cartoon episodes and possibly cartoon merch. I’d like for it to capture the essence of CN’s Cartoon Planet or The Hudson Brothers Razzle Dazzle Show, with quick jokes, bits and self-aware inanity. My big concern with this idea is that it may smack too much of Cartoon Country, so this may just become another branch or aspect of Cartoon Country, which would also be cool, since one of the goals we both have for this year is to get back into producing Cartoon Countries on a regular basis.

The final new segment I’m working on started out as a piece I had planned to do on Marvel’s Inhumans.

Two things I like about the Inhumans are 1) that they’re not superheroes, despite meeting and teaming up with them on occasion and 2) the central characters are a family. This evolved into a general ongoing segment about a quirky and kooky yet loving and functional family, something I’ve wanted to do for a while now. However, I don’t want them to just be an ordinary family; I’m not trying to do something like The Family Circus or Fox Trot, that would be boring; this family will have some kind of unique cartoon hook, gimmick or twist of some kind. Presently I’m calling this segment Family Fun, but that won’t be its’ final name.

For a little while now, I’ve been interested in Cyborcat’s recurring segments, The Game Den and The Film Den, respectively. I particularly liked how Dena split them off into two separate segments, but they’re still connected in terms of theme and approach.* Also, I’ve been watching James Rolfe’s reviews of monster movies such Godzilla and King Kong, as well as James’ two part “Power Rangers: A Noob’s Guide” video, and I’ve been thinking about doing something along those lines, only bigger and wilder, with the usual jokes and nonsense attached to them. Nothing is final as of yet, but here are some of the themes that I’m considering going with:

I thought about tackling the tropes and character archetypes of domestic comedies, similar to the Nerdvana segment, “Making Family Fun”, only more detailed and specific. Currently, I’m calling this segment The Family Factor. Also, I’ve been trying to do something with the idea of the kidcom with the sci-fi twist (which I’ve been wanting to do for a little while now), something along the lines of Wake, Rattle and Roll, Johnny Test or Out of Jimmy’s Head, only good, so this segment could possibly tie in to that idea.

The other segment was originally going to be me talking about toys based on cartoons or toy franchises, but I wasn’t coming up with a lot of ideas for this, so then I thought about just talking about merchandise based on cartoons and franchises, similar to the late TLC show (back when TLC stood for The Learning Channel) called Neat Stuff. In this form, I’ve been calling the segment The Toy Factor. One thing possibly preventing this idea is that concept-wise, it’s not far enough away from Nerdvana. Of course, any ideas for this could easily lead to more Nerdvana segments, which I wouldn’t mind at all, so I just might approach the idea this way instead of making a new segment. We’ll see.

I’d also like to do something along the lines of Doug and Rob Walker’s Sibling Rivalry/Real Thoughts segments mixed with Trent Troop and Greg Sepelak’s Under the Table podcasts mixed with The Sifl & Olly Show; quick little jokes, quips and thought bubbles about subjects that aren’t major enough to devote an entire segment to.

I also thought about focusing on the art and settings of video games, but that might be too similar to Videots. Of course, I could always do those as Videots segments. OK, so it seems evident that I don’t actually have a particular subject in mind for either of these connected segments at this time, or anything other than the desire to do them (although this may change when I find something new to “groove” on, as I mentioned back in “Twinsanity’s New Groove”).  In hindsight, it’s not really me doing an entirely new segment so much as approaching the established segments in a slightly different (and better) way. In any case, if this happens at all, I want there to be 2 of these segments and both of the segments will have similar themed names, as with Cyborcat’s segments*.

*Inspired by this, we’ve decided to rename the Retro Box and Wild World of Shows segments, since they too are connected as being opposite sides of the same coin. One segment roasts past cartoons pulled out of the trash bin, while the other turns an appreciative spotlight on obscure cartoons which have fallen into the couch cushions. So henceforth The Retro Box shall be known as The Retro Bin, while the Wild World of Shows is now The Cartoon Couch. The content of each segment is still the same. ‘Kay?