What The Funny #1: Rocko’s Happy Sack

Nickelodeon recently revealed that the studio is working on an original hour long TV special based on one of it’s popular animated series, Rocko’s Modern Life. Series creator Joe Murray is involved in it’s production.

So to mark this occasion, I thought it might be fun to pay tribute to my favorite Nicktoon by covering some of my favorite Rocko shorts in a new mini series segment (inspired by Chris Stuckmann’s Hilariocity and Alison Pregler’s Baywatching) which I’m calling What The Funny. Here’s how it’ll work: Basically, I’m going to profile a short that I like, give a brief synopsis of said short and then break down the funniest moments from it.

Now, you’re probably asking me to yourself…

Don’t you already have a segment like this? Isn’t this Cartoon Country?

Not exactly. Cartoon Country is a grab bag; the cartoon that’s  presented on CC is something different every time. What The Funny, by contrast, only focuses on a single cartoon, studio or franchise and has more than a single post devoted to it. Before we begin, let me explain the rules here:

…but since this is my blog,  we’re only going to focus on my personal pics. 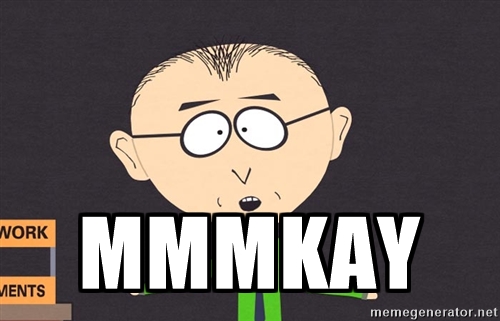 Now that we’ve gotten that out of the way, here we go with What The Funny!:

In this episode Rocko and Spunky hurry to the local grocery store to take advantage of a big 99% off everything sale.

The short starts with Rocko and Spunky at home with absolutely zero food in the house. Even the bugs are holding up “Will work for food” signs. There’s also a mouse skeleton that looks suspiciously like that of Mickey Mouse. Unfortunately, Rocko has only three dollars until pay day. Rocko and Spunky’s hunger sustains and they mope in depression. When Rocko views a 99% off everything sale at the Heap-O-Food market in the newspaper, he and Spunky hurry up and drive to the market before twelve o’clock (the time when the big sale ends).

I love this display. It was great how Joe Murray and his team was able to slip stuff like under the radar.

I don’t know if this guy is supposed to be an actual lava man or just a guy in a costume (whith this show, you can never be sure), but the first time that I saw him, I was instantly reminded of the oddball creatures from the movie “Yellow Submarine”.

Spunky follows a (living) piece of liver into the meat packing room, where he’s wrapped up in put on display, and then promptly picked up by another customer (voiced by Charles Adler). Upon discovering this, Rocko tries to dissuade the guy from purchasing his dog.

Rocko: Dog meat?? Eeeww! Sir, do you know that dog meat causes you to be…irregular?

And that’s funny because PCP is a drug, CBC is the initials of the Canadian Broadcasting Corporation and BVD is popular brand of men’s underwear.

Rocko then explains that when fishermen hunt for dog meat, how the sea mammals accidentally get caught in the fishermen’s nets, and then we get the following exchange:

Rocko finally goes to the checkout line. The cashier is Filburt (who at this point in the series hasn’t yet been made into Rocko’s friend. Here, they act as if they don’t know each other). The clock literally ticks down to the final second (after Filburt  requests a price check on Frog Butter – “Is Frog Butter dairy or hygiene?”). The price is checked at $1.50, but then a second later, it changes to $150.00. Then Rocko becomes enraged and goes into one of my all time favorite meltdowns:

Filburt: And your total is…
(The cash register shows “$1.50”)
Rocko: Phew!
(The total suddenly increases)
Filburt: One hundred and fifty dollars. Gee, looks like you just missed our big sale. Have a nice day.

(Rocko grits his teeth and gets bombs in his eyes)
Rocko: YOU CHEAP LITTLE ROTTER!!!!!!! I have been run over by a car, made to drag around a gimp shopping cart, threatened by your Gestapo security guards, had me head set on fire, I was attacked by wild lobsters, beaten by a very LARGE woman, had me dog wrapped in plastic, nearly starved to death and I still made the twelve o’clock deadline! So if you don’t change that total back to a dollar fifty, I WILL DO SOMETHING NOT NICE!!!!!!!!!!!

Filburt: That’ll be one dollar and fifty cents please.

When Rocko loads the trunk of his car with the food he purchased, he tells Spunky that sometimes, marketing day can be a very dangerous day. After closing the trunk, he drives home and rides through a speed bump, the impact of which causes the food to fall out of the trunk as Rocko, oblivious to this, continues driving.

This is one of my all time favorite Rocko shorts. Rocko doesn’t lose it very often, so when he does, it usually hilarious. I can relate to Rocko’s situation and I was glad to see him force someone to follow his order for once.  I also love Heap-O-Food’s sale with everything being 99% of until noon. Cartoon logic is crazy, but great.