There’s far too much animosity in the world today.

After a while, I get tired of seeing pairs of characters constantly hating each others’ guts and always being at each others’ throats. This is why today’s Nerdvana takes the opposite approach and pays tribute to some of my favorite besties in fiction. Today we celebrate…Super Best Friends, some of my favorite fictional best friend duos. As you should know by now, we’re big on duos here at Twinsanity.

I know these days lots of peoples’ favorite Blue Beetle is Jaime Reyes because “he was in Young Justice and that was the best DC show eva and I hate Cartoon Network for cancelling it for Teen Titans GO! and blah blah blah blah blah”, but my favorite Blue Beetle is and always has been Ted Kord, the goofy genius with the amazing tech. For a time during his reign, it looked like Ted was being groomed to be the Tony Stark of DC, and I definitely could’ve gotten behind that. Ted wasn’t dark, brooding, perfect or overly serious; he was fun, good natured and self-effacing, something you rarely see in capes nowadays. Another reason I like Ted Kord is because he was bosom chums with another C-list at best superhero, Booster Gold, everyone’s favorite time-traveling glory hound. Together the 2 of them formed the duo of Blue & Gold, getting into wacky shenanigans and even dare I say… 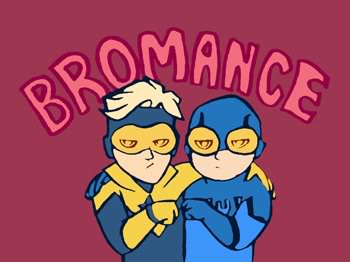 While Booster Gold has made a few TV appearances already, we’ve seen very little of Ted in animation, mainly because by the time of the DCAU and the subsequent superhero media boom, Ted Kord was already deceased in the comics. Darn shame. Maybe after DC reboots and retcons their universe for the umptee-seventh time, they can resurrect Ted, and then maybe we can finally get some Blue and Gold antics on a TV show or DTV movie. Personally I’d totally be up for some “BWAH-HA-HA!” action somewhere. Fun, goofball superhero buddies are sadly rare. 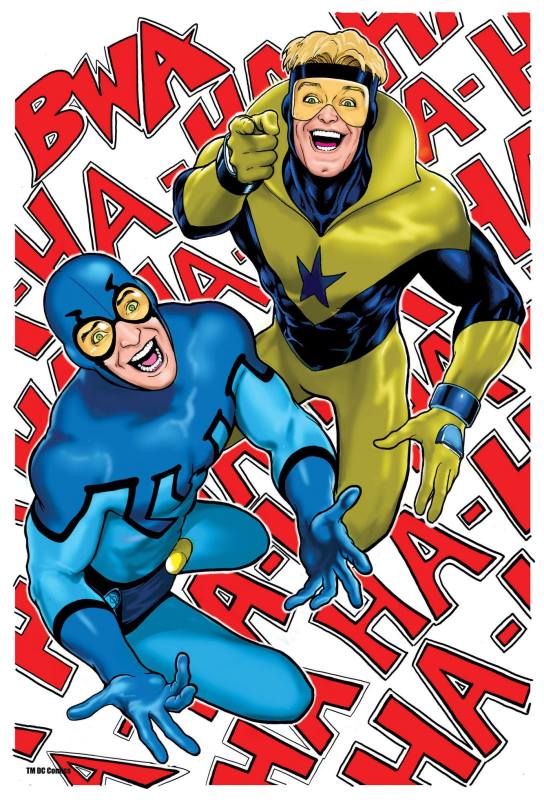 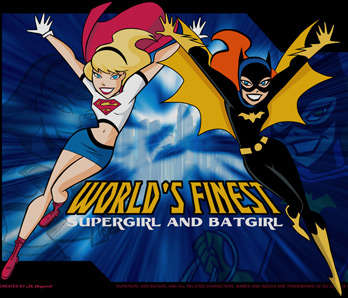 I’ve already went over this briefly in Carpin’ and Gripin’, but one of the many reasons why Batman V Superman: Dawn of Justice left me cold is because I’m personally sick and tired of Supey and Batsy’s nonstop pissing contests that DC and popular media insist on perpetuating post-Dark Knight Returns. This is why I’m glad to see that whenever Superman and Batman’s female counterparts, get together, they actually get along. When Batgirl and Supergirl team up, they don’t start fuedin’ and fussin’ like cats and dogs, they’re fast friends, working together and complimenting one another, Kara’s arsenal of alien powers meshing well with Barbara’s big brain and incredible tech arsenal. (In fact, their friendship calls to mind a show idea I tried developing many years ago called Super Trouble!, about 2 silly young aspiring girl heroes who were always getting into crazee situations, think Broad City meets Freakazoid!.) I still dig Superman and Batman as they’re the parentheses of the superhero world, but I’d really like to see this ongoing chest-pounding contest between them come to an end; they could learn a lesson from their teenage girl offshoots. maybe one day we can get a response movie called Batgirl & Supergirl: Dawn of Besties.

No, these 2 aren’t superheroes or even main characters, but our site, our rules. My favorite 2 background ponies, each one belonging to my 2 favorite Pony Tribes (no offense to the Pegasi, but I’ve always liked the unicorns since they can do magic, and the Apple Family, Mr. and Mrs. Cake and Bon Bon made me a fan of the Earth Ponies–I can’t resist the country, candy and desserts); the MLP fan base turned these 2 random characters into a cute and endearing coupl…er, um…DUO. Yeah, duo. When Lyra and Bon Bon finally made their speaking debut as said characters in Friendship Is Magic‘s 100th episode “Slice of Life”, they didn’t disappoint:

No, I’m not delusional, I know that’ll NEVER happen in canon, but I wouldn’t be against it; I find Bon Bon (or Sweetie Drops) and Lyra to be profoundly cute together, in any regard, I’m OK with them just being BFFs (Best Fillies Forever).

“I dunno y’all, I’d like to see me some filly on filly action. That’d be groovitatious!”