Today the Cartoon Couch looks at a forgotten cartoon which never actually became a show.

Let’s go back to 2006. During this time, Nickelodeon/Nicktoons Network was airing an anthology series entitled Random! Cartoons. Much like the earlier Oh, Yeah! Cartoons,  R!C showcased pilots for potential new Nickelodeon animated series in the form of one-shot shorts. While OY!C launched no less than 3 ongoing series for Nick (The Fairly OddParents, ChalkZone and My Life as a Teenage Robot), only 2 shorts from Random! Cartoons went on to become shows: Fanboy & Chum-Chum and Adventure Time (yes, that Adventure Time), the latter of which switched networks before getting greenlit (evidently Nick wanted to change too much of Pendleton Ward’s original vision, so he ended up taking his act to Cartoon Network instead. That’s right, Adventure Time was almost a Nickelodeon show). One of the many R!C shorts which didn’t receive the call was an overlooked (in my opinion) little gem which is the focus of today’s Cartoon Couch: Melissa Wolfe and Anne Walker Farrell’s Sparkles & Gloom. 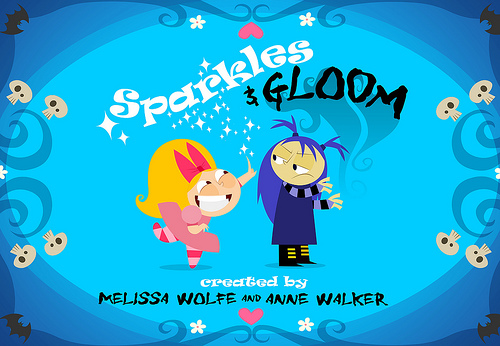 For the uninformed, here’s the skinny: Sparkles and Gloom are the twin daughters of a wicked witch and Prince Charming; the former is a perky, bubbly, relentlessly cheery Strawberry Shortcake/Rainbow Brite type, the latter is a pragmatic, Goth-dressing sourpuss. Each girl posesses magical powers, while Sparkles’ abilities involve conjuring things like “happy rainbows”, Gloom deals mainly in curses, black smoke, skulls and poison mushrooms. Their opposing ideologies cause them to elevate sibling rivalry to a whole new level. 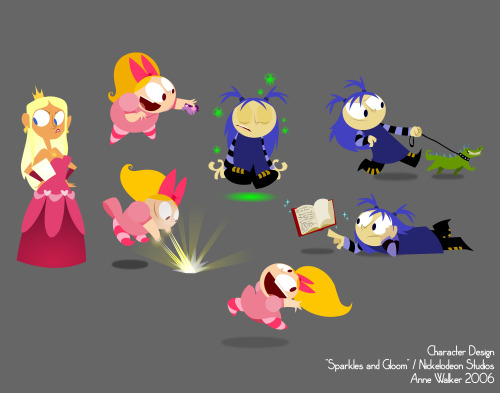 Some character design sketches from co-creator Anne Walker. I have no idea who the princess character on the far left is, she doesn’t appear in the final short.

It’s a bizarre world that our titular duo inhabits, one where shiny, happy, toyetic goodniks and creeps and monsters cohabitate in PC togetherness. This movement is culminated in the academy the girls attend, the Geevil School, “Where Good and Evil are Best Friends”, in which fairies, Royals and cute little teddy bears, bunnies and unicorns rub elbows with green skinned witches and big purple monsters. The rest of this world is OK with this co-existence, however, our title pair just can’t seem to get on the same page. 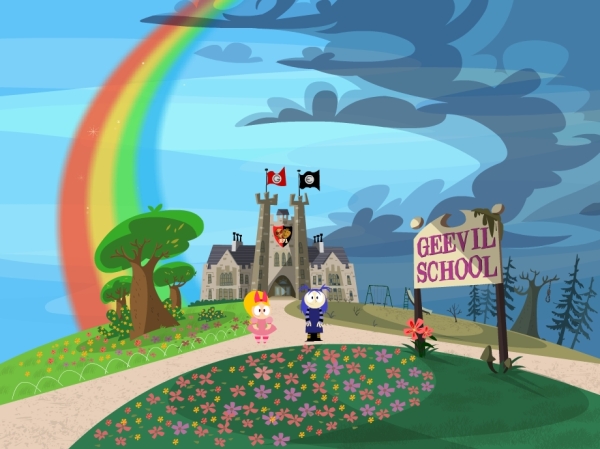 Here now is the 1st (and only) episode of Sparkles & Gloom. (NOTE: since this is only a one-shot short and not an ongoing series, I won’t be giving it the full series assessment treatment. I’ll instead just list what I both liked about the short and didn’t like quite so much, or at least felt could have been improved.) 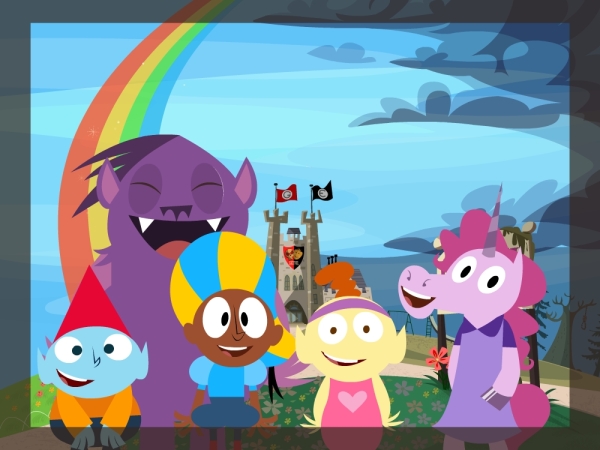 -My overall rating for this short:

On a scale of 1 to 5, I’d give Sparkles & Gloom a solid 3. Not perfect, but still pretty good. Maybe these creators could pitch this series somewhere else, or give us something similar. It was definitely more deserving of a series than Fanboy & Chum-Chum. If you can find it floating around on the internet, get your magic on and give it a watch.