Nerdvana: The World of Dragon Ball

It’s time to geek out over a setting again. Today Nerdvana takes a look at the world of Dragon Ball.

This show rocks your balls!

Time for the obligatory disclaimer: this isn’t a review. By now there have been literally dozens upon dozens of reviews, commentaries and analyses on the adventures of Son Goku and the gang, which is why I’m not going to bother trying it myself. I’ll be specifically talking about the world that show is set in, not the show itself. Now, on to the fun:

Like most artists/writers, I’m a sucker for fantasy worlds. Some people prefer medieval fantasy, others prefer steampunk, some even fancy dystopia (I personally find dystopian settings to be about as much fun as a route canal, but that’s just me). One of my favorite fantasy settings is what I’ve come to term 30 Minutes into the Future, or the World of Next Tuesday. It’s a contemporary fantasy world setting which resembles our world, but not entirely. The version of Earth envisioned by Akira Toriyama in such works as Dragon Ball and Dr. Slump is a good example of the type of fantasy setting I’d like to make a cartoon about one day. One which resembles contemporary Earth, but tweaked and twisted with some futuristic, mythical and just plain outlandish elements.

Let’s start with the architecture. I love Toriyama’s environments and cityspcapes; the ovoid and spherical buildings and structures, mostly gleaming white. 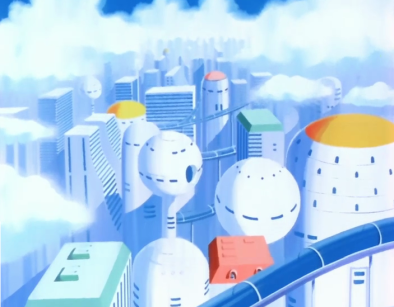 I also like the designs and mythos surrounding its’ inhabitants.

People…people who like Dragon Balls…are the luckiest people in the world.

According to the story of Dragon Ball Online, which takes place in their year 1000,  the humans have the longest established culture on Earth, and they’re also the most prolific, having spread to all corners of the world, including the Wastelands. As of Age 1000, the human race has become cross-bred with the Saiyan race, and as such, many believe that the race holds a powerful, hidden potential, due to their part Saiyan blood. This setting has spawned 3 main classifications of humans which I’d also like to adapt in a work:

Martial Artists – Warriors that specialize primarily in martial arts, with limited use of ki.

Spiritualists – Mystics that specialize in spiritual, ki (or mana)-based techniques.

-I’d prefer to be a Spiritualist over a Martial Artist, since I’ve always been more into Magic than Might.

Really, they’re both good choices. As long as I get to be one of the people who can fly, s’all good.

And finally, Engineers – Mechanics and inventors who build weapons and utilize technology.

“I’m blinding you, with SCIENCE!”

Which brings me to the next thing I love about Toriyama’s Earth: the advanced technology, particularly the innvations provided by the Capsule Corporation.

CAPSULE CORP. Bringing you into the future…this afternoon.

This company is responsible for the capsules which can store anything from a water bottle to a car to a tent to a small house.

In your face, Public Storage!

Plus, you get to live and operate from a giant yellow dome!

Another cool device this world boasts is the freaking hovercar.

It’s a FLYING CAR. Come on.

From the makers of the hoverboard…

Perfect for quick trips to the store, jaunts to the beach, cruising ’round the countryside or evading Storm-troopers on the planet Endor.

As previously stated, I really dig the designs and unique quirks of the people in Toriyama’s works.

The punnish names, the quirky clothes…

“No dye job, honey. This is a natural purple.”

I’m aware of what Jason previously covered in Furry Confusion, and I agree with the points made there, but hear me out. On Toriyama’s Earth, 17% of its’ sapient population were talking animal people, because Toriyama just enjoys drawing them, however I’ve always felt that if you anthropomorphize animals too much then there’s no point in making them animals in the first place. That said, I do like the talking animal idea, I’d just execute it a little differently. In my head canon the Toriyama version of Earth is Hidden Kingdom from Hero: 108, only about a century or so in the future. In ancient times, animals and humans belonged to separate tribes which co-existed alongside one another. Humans began evolving and developing things like tools, weapons, vehicles, cities, burger joints and so on, while animals remained “savage” but eventually learned to speak the language of humans. This resulted in a sub-culture of sentient animals who are able to speak directly to humans but are still animals; they talk, occasionally walk upright but don’t wear full compliments of clothing, can’t operate vehicles or hold down jobs, and only the ones which are pets (though they prefer the term “companions”) live in houses and buildings. I’ve always wanted to do a story in which talking animals were a sort-of fun house mirror equivalent to the Mutants in the Marvel universe, and that’s how I’d execute this idea.

“You really have no life, do you?”

While we’re at it, let’s extend this “semi-anthropomorphism” to dinosaurs, since it’s already been established that dinos aren’t extinct in this world…

…And why not extend that to their cousins, the dragons (as in the non-Eternal variety). They’re like dinosaurs but they can breathe fire, fly and other cool stuff.

A Dance with Dragons

But you know who I truly envy in the Dragon Ball world?

Yeah, I know he’s a fraud and basically the joke/comic relief of the franchise, but you’ve gotta hand it to Mr. Satan; the guy’s the king of dumb luck. He managed to become stinking rich and super-famous, even getting an entire city named after him, for doing nothing. Classic case being in the right place at the right time. he is the Martial Arts Champion, so as normal humans go, he is actually pretty formidable, but he’s absolutely nothing compared to Goku and company.