Today Cartoon Country looks at the season 1 Johnny Test episode, “Johnny’s Big Snow Job”. The plot: it’s winter time in Porkbelly, and Johnny, being the Totally Rad Dude (TM) that he is, wants a snow day so he can snowboard and slack off from school, but the town is instead in the midst of an unseasonable heat wave. So as always he turns to his much more appealing and interesting genius twin sisters, Susan and Mary, to whip up a snow making machine. They do, Johnny overdoes it as usual, and wackiness ensues.

OK, time for the nitpicks:

1. In the middle of the story, after the machine goes haywire, Johnny remarks that he and his family have been trapped indoors for a month. A month?? Yeah, even by cartoon logic I have to call BS on that. I live on the East Coast and I’ve unfortunately been snowed in during my share of winters; most people are climbing the walls after 2 days, but these guys are just nonchalantly chillaxing at home after being trapped inside for a month? No. By Day 30 it should be like Lord of the Flies in there.

2. Notice anything missing in that scene? Where the smeg was their mom, Lila? Yeah, I know part of her character’s shtick is that she’s “super busy” and all that, but come on. They’ve all been buried under several feet of snow. The dad Hugh said that the entire town had run out of food. If that were truly the case, then all non-essential businesses would be closed. No way would Lila be off having a normal day at work in the middle of a Snowpocalypse. And if she somehow were able to tunnel her way out to go to work, then they could just travel to the next nearby town and get some freaking food! How hard would it have been for the artists to simply draw Lila at the table with the rest of the family? Even if Kathleen Barr wasn’t available to voice the character, the writers could have acknowledged her existence, given the extraordinary circumstances. That was just lazy. (Unless the family resorted to cannibalism and ate Lila somewhere around day 15, and I can’t believe that for a second; if they really were going to resort to that, then Johnny would logically be the first one to go into the pot.)

That aside, “Johnny’s Big Snow Job” was fairly entertaining, by Johnny Test standards, anyway. Some of the gags were pretty amusing, like the weatherman plugging a sports drink in the middle of his broadcast or the montage where Johnny and Dukey are begging the twins to make it snow (the fact that you got to see Susan and Mary in swimsuits didn’t hurt either), and this was a season 1 episode, back when the show was still a co-production between Teletoon and Warner Bros., so the animation was pretty decent. 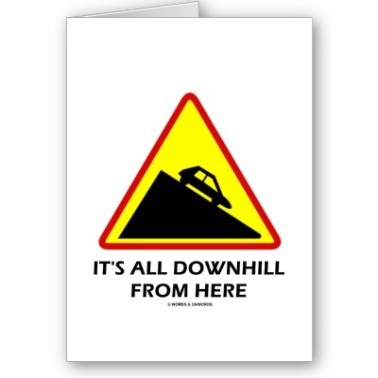 And it was all downhill from there.