As you know (unless you’ve been living under a rock, not that we’re judging you, rent’s high, man), October is the month of Halloween. To honor the occasion, we’ll be looking at a forgotten Halloween special, a spooky, haunting outing starring a scary group of…space aliens.

Fun Trivia fact: Bill Hanna himself provided the narration for this special. Also, the special tied into a marketing campaign that candy company M&M/Mars was doing at the time, Mission from Mars.

The plot (such as it is) a tad..clunky. Upon watching it, you’ll find yourself going “Whaaa…?” a lot.
The special is set in a town called Crystal Lake, not a camp called Crystal Lake, so no cameo by Jason Voorhees.
Four aliens – Gleep (Paul Williams), Romtu (Don Messick), Scoota (Frank Welker), and Bing (also Frank Welker) have been sent to Earth from the planet Mars (’cause it had a product tie-in with M&M/MARS. Get it? Get it??) in order to find a rare material known as “coobi” (which is later revealed to be candy). After crash landing on Earth, they wander the streets searching for “coobi,” but are mistaken for trick-or-treaters and ignored. When Scoota gets a strong reading on his “coobi meter,” the four aliens chase down two children, Jeanie (Sarah Matinek) and Michael (Will Nipper), into the woods. The children learn about the aliens’ mission and agree to help them collect candy.

“Feh. When we landed on Earth, were we befriended by nice kids? No! We got chased into a creepy house and were forced to live there. Yeah, life’s fair!”
Naturally, keeping in tune with TV and Movie Cliches 101, when the aliens patrol the streets in search of candy, they are of course mistaken for kids in costumes, despite them looking like things that fell out of the Master Controller’s nose.

If you saw these guys on your block, you wouldn’t think they were trick-or-treaters, you’d think that George Lucas was holding auditions for his next unnecessary Star Wars prequel.

One of the many little less-than-thoroughly explored subplots in this special is how Michael wigs over how his sister Jennie always wears the same costume every Halloween; the reason being that said costume was crafted by the kids’ late mother, who has apparently died of CFMDS (Convenient Fictional Mother Death Syndrome–an illness which runs rampant throughout the Disney Studio). And oh, the smarmy tacked-on sentiment that this plot point inspires: EVERY time someone mentions the dead mother, the music swells and someone delivers a sappy speech chock full of greeting card homilies such as “Mothers are more beautiful than fairies”, leading to a hee-larious scene in which our alien buddies happen upon a boy wearing a fairy costume (!) and assume him to be a mother.

There’s also another subplot involving Rhea Perlman as Mrs. Gizbourne, a creepy mad scientist lady who, along her henchman Hans (Richard “Bull” Moll), are holed up in an old Victorian style house performing experiments on insects to find the secrets of eternal youth. It is revealed that by performing these experiments they have nearly drained Crystal Lake, which is the main source of power for a candy factory in town. Mrs. Gizbourne then demands that Hans find a bug “big and strong enough to survive a nuclear meltdown.”

“Good, good.”
And oh noes! If the candy factory closes down, then this will be the last Halloween in the town. (Why? They never say.) Anyway, the special returns to the children and the aliens. They agree to split into two groups to find more candy, one group consisting of Gleep, Romtu, and Scoota and the other group consisting of Jeanie, Michael and Bing. One of the aliens, Bing (not Crosby) is mistaken by Hans to be a giant bug and is captured and taken back to Gizbourne’s house. The children learn of Mrs. Gizbourne’s plot, but are soon captured by Hans. Jeanie and Michael are quickly able to escape with Bing in tow to the lake. There they are found by Jeanie and Michael’s father, who goes on to thwart Mrs. Gizbourne’s plans. The first group of aliens then arrive at the candy factory, take all of the candy, give Michael a special skipping stone and return to Mars. Michael uses this stone and the power of wishing to revive Crystal Lake. (He could have wished for his mother to come back to life, but why waste it on something frivolous?) The candy factory is thus saved, and the townspeople end the special rejoicing.

“Yay.”
As previously mentioned, The Last Halloween was made as a tie-in to a candy company’s Halloween campaign, which begs the question….. 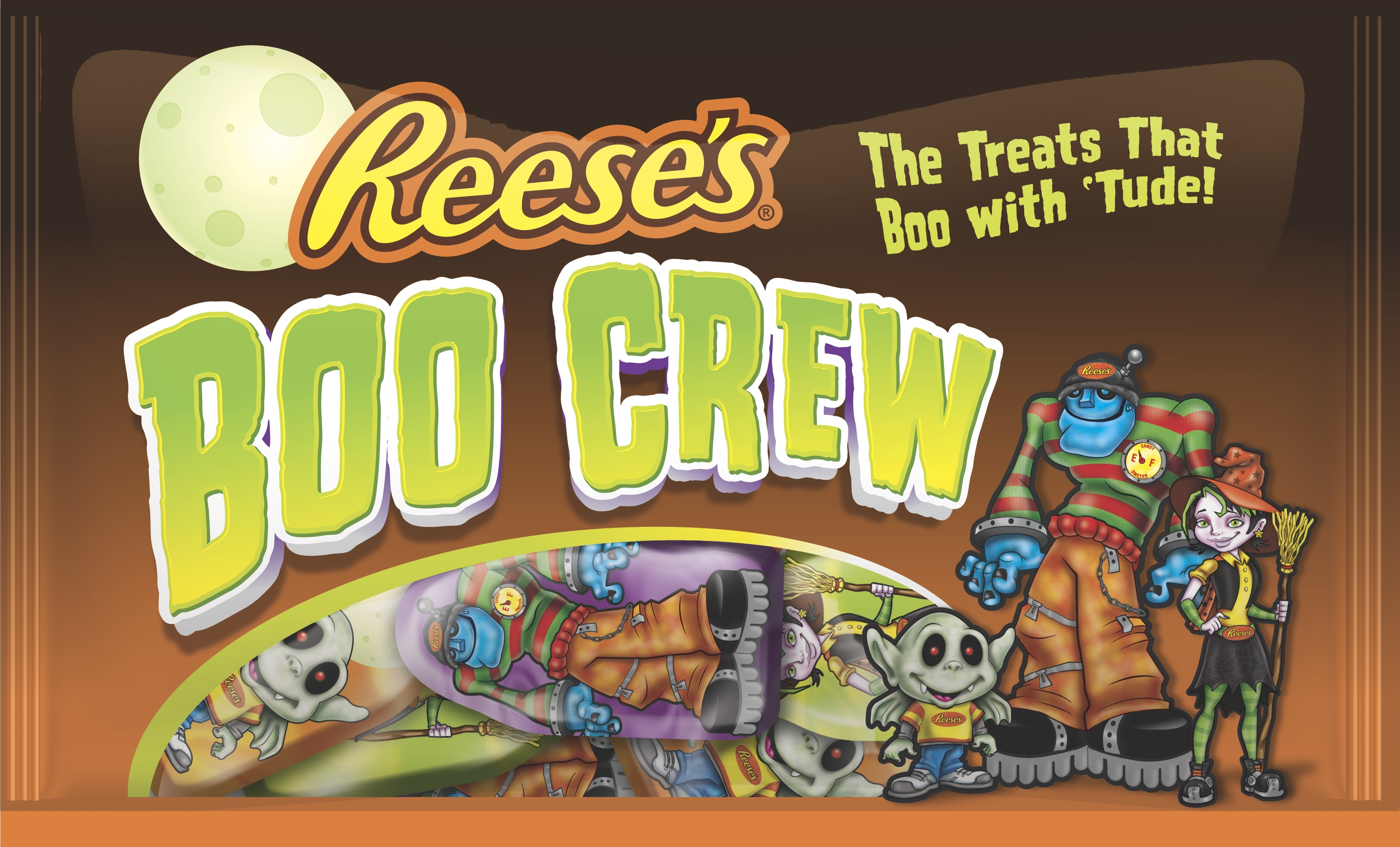 …So when are the Reese’s Boo Crew going to get their own TV special?