The Ulti-Meatum is the burger featured in “The Best Burger in the World”. It’s the greatest culinary concoction since the commemorative 7-patty Windows 7 Whopper.

This was really a thing. Look it up. 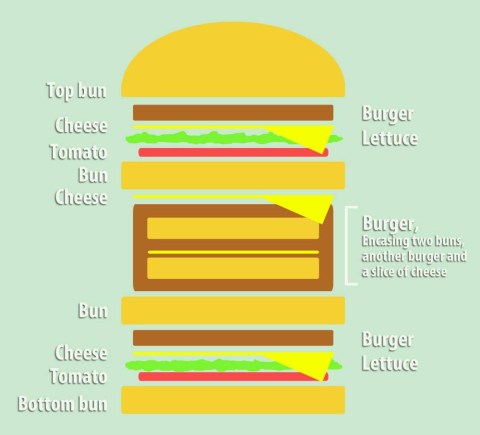 “Would you like the name of a good heart specialist with that?”
According to Muscle Man, the Idaho Style Ulti-Meatum is where the burger is made the same way, but with a whole bag of chips in it as well. Yep, Muscle Man likes it Idaho Style.

“You know who else likes it Idaho Style? MY MOM! -Seriously, she’s quite fond of those chips.”
But the most amazing thing about the Ulti-Meatum is that IT ACTUALLY EXISTS NOW. Inspired by the Regular Show episode, restaurants such as Mister Eaters restaurant of Preston, Lancashire and other ambitious eaters have taken to making their own versions of this 10,000 calorie leviathan. At Mister Eaters the sandwich is free, assuming you can eat the whole thing and live to tell about it.

So you don’t have to wait a century. If you can find a place crazy enough to prepare it, grab yourself an Ulti-Meatum today.