NOTE: you must be over 40 years old or a classic TV buff to know what the flaming heck we’re taking about here. 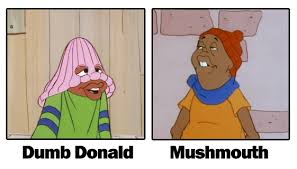 The character on the left is Dumb Donald from Fat Albert and the Cosby Kids. He’s the Cosby Kid known for being as smart as a bag of rocks and wearing a ski cap over his head, presumably hiding a horrible disfigurement or premature baldness, or maybe just the total absence of a face altogether.
The character on the right is Mushmouth, also from Fat Albert. His chief claim to fame is that he spoke in a hee-larious (in the days preceding Political Correctness) speech impediment, putting “buh”s after each syllable.

“Pretty different, really. Not really the same thing at all, is it?? IS IT?!?

You’d be surprised, actually. Fat Albert and the Cosby Kids, which ran on CBS on Saturday mornings from September 9, 1972 to September 1, 1984 and then in syndication until August of 1985, was a wildly popular show among the Generation X crowd; the cartoon was so popular, in fact, that according to Tim and Greg Burke’s book Saturday Morning Fever (if you don’t own this book, you should; it’s a great read) a fan at one time wrote and performed his own twisted episodes of the show for his college drama group, boasting such titles as “It’s Not Cool to Mess with Satanic Ritual” and “Weird Harold Gets AIDS”.
Yet somehow, many of our collective wires have gotten crossed over the years. For some reason, fans of the show frequently tend to remember the character of Dumb Donald as Mushmouth, like they’ll spot your bitchin’ Dumb Donald tramp stamp and then start talking like Mushmouth, for example. It’s like how many folks who remember Charles Schulz’s Peanuts seem to confuse the character of Schroeder for Linus, possibly since both characters wore shirts with horizontal stripes on them and both characters spent a lot of time with Lucy, though in the case of both characters, it wasn’t by choice.

Schroeder: Blond hair. Plays the piano. Digs Beethoven.
Linus: stringy hair. Addicted to security blanket.
Know the difference.
*******************
Getting back to Dumb Donald and Mushmouth, there have 3 notable examples in popular media where these 2 characters have been confused for one another:
To add insult to infamy, for a while during the last years of the USA Network’s airing cartoons during the day, for a time Fat Albert ran on USA just after the USA Cartoon Express (I’m guessing the reason Fat Albert was never actually part of the Cartoon Express was because it had pro-social values and an edutainment factor, so USA didn’t want to lump it in with their other shows, either that or the Cos paid them big time to give his show special treatment), and in one promo for the show, a voice-over speaking in a less-than-stellar Bill Cosby impersonation referred to Dumb Donald as ‘Weird Harold’. 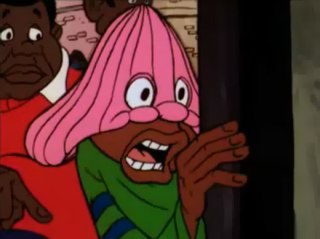