By now, most of us are familiar with the famous (or infamous, depending on your point of view) star of Tiny Toon Adventures, Elmyra Duff…..

Relax. It’s because Elmyra is so well known that we won’t be profiling her here. Beyond the Background is for shining the spotlight on the more obscure, lesser-known and forgotten characters, so Elmyra doesn’t qualify.

Instead, we’ll be looking at Elmyra’s family, the Duffs (it’s ‘Fudd’ spelled backwards, get it?), who only appeared in 2 TTA episodes, “Take Elmyra Please” and “Grandma’s Dead”. Some have speculated that these 2 eps were meant to be pilots for an Elmyra spinoff series, but that’s just an internet rumor. Elmyra’s family didn’t even appear in Pinky, Elmyra and the Brain. So whatever became of the Duffs? What are they up to now?

We’re glad we pretended you asked.

First, there’s the mother of the family, Emily Duff, a hard working if somewhat oblivious mom who works at a public radio station. Post TTA, she has been spotted serving jury duty on Animaniacs, and she was most recently a contestant on the popular game show, You Risk Your Life (appearing under the pseudonym “Mrs. Myra Puntridge” due to requests from the radio station, who felt that public radio should never be associated with anything profitable), winning big with her partner, Aristotle. 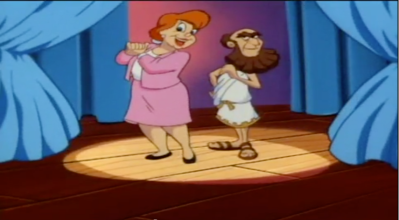 Say, I wonder what she did with her winnings?

“I…spent it all on exotic cupcakes. Seventeen dozen exotic cupcakes. The Cupcake of the Month Club were very persuasive, and the family ate them all up, literally! But the flavors were so tempting! Carolina Crunchy Creme, Simply Red Velvet, Breakfast Cereal Chunk Cluster, Strawberry Banana Fondue Whip….uh, but I digress. We’ll be discussing it on my next broadcast, Cupcakes and the People Who Love Them.”
Next up we have Elmyra’s dad, MacArthur Duff (aka “Mac”, Mac Duff. Get it? GET IT??). He is an inventor, always trying to come up with a revolutionary new discovery. Some of Mac’s previous attempts include a clean-burning fuel made from cholesterol (“Take Elmyra Please”) and drinking water made from tears (“Grandma’s Dead”). Those didn’t exactly take off, but we hear he’s still in the game.

“My latest invention is sure to become a household name! I even paid for a commercial for it! I came up with the name myself!”
‘Kay, well, I won’t be forgetting that anytime soon. Moving on…
We next come to Elmyra’s sarcastic teenage older sister, Amanda Duff, who typically spent her time chatting on the phone and being embarrassed and annoyed by her family. I wonder what she’s been doing since her last TV appearance? 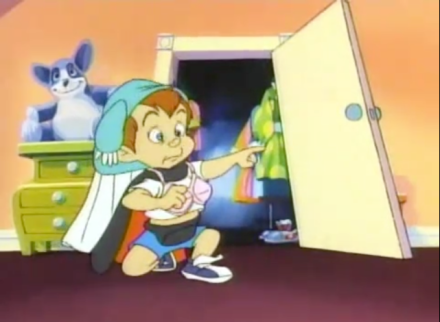 “Please! Those games were ridiculous. I’m matured since then; these days I go by Boy Wonderful! I’m planning to start a suburban division of the Teen Titans called Pre-Teen Titans Midwest! All I need is a T-shaped tower and some kids with super powers to lead. Just don’t tell my folks, OK? My mom worries!”
Next up is the family’s foreign-born, super-strong maid, Queegee Bananahoe, who appeared only in “Take Elmyra Please”. We weren’t able to contact Queegee, and all known photos of her have since been removed. Wonder why… 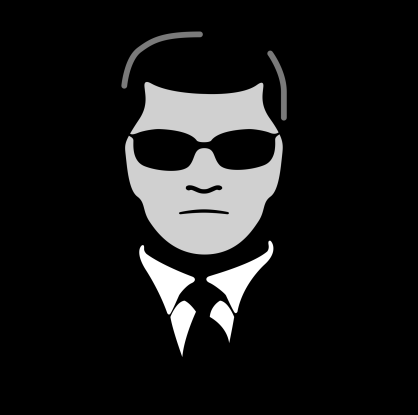 “Ms. Bananahoe was in our country illegally. Her ‘papers’ were just a single sheet of pink construction paper with the words “I B AMERURICAN CITUSEN” written in crayon, so we had to deport her. Besides, who in this day and age thinks a cheap, stereotyped impression of a foreigner is funny?”

Baby’s present whereabouts are not publicly known. When asked, all we could get out of people are hazy recollections of a “device” and rumors of a hidden dungeon said to be located underneath the sandbox of Baby Cakes Day Care Center.

“I told that semi-evolved mouth-breather to stay away from my cookies! Once again, VICTORY IS MINE!”

2 thoughts on “Beyond the Background: Elmyra’s Family”