The Cartoon Couch: The Why Why Family

Welcome to a new segment of Twinsanity called The Cartoon Couch, in which we unearth some of the the most unique, obscure and in some cases downright odd shows which many people have long forgotten (or just plain didn’t know about in the first place), but which we thought were kind of good, fun or at least had potential. Basically the flip side of The Retro Bin. Today, we’ll be looking at a forgotten toon titled Les Kikekoi, or as we Yanks called it, Saban’s The Why Why Family. 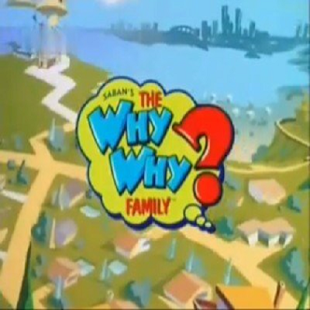 The Why Why Family was a French-produced animated children’s series which originally aired in syndication in 1996, written by Annabelle Perrichon and François-Emmanuel Porché and produced by Saban Entertainment and CineGroupe. Later, in 1998, the show was broadcast in the United States by Fox. I personally only saw a single episode of this during its’ initial run; I had to catch the rest of the series on YouTube. It centered on a family unit who all lived in a bizarro hodgepodge house which was a mishmash of several different structures, sporting an astronomical observatory, a rocket hangar, a greenhouse, a giant microscope, a zigzag slide and several platforms. 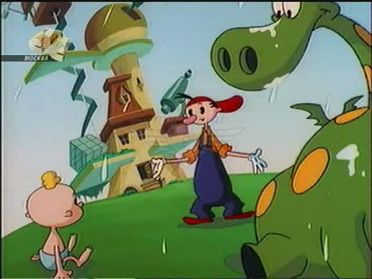 I hear the architect who designed the Why Why home used it as a prototype for Pee-Wee’s Playhouse.

The plot was simpler than ABC: in each segment, the lone child of the family, one towheaded toddler named Baby Victor, would pose a question inquiring how a particular thing worked, then another respective family member would proceed to explain it in a fun, quirky way. There were 5 segments per show. Laugh, learn, wash, rinse, repeat. The Why Whys themselves were a unique and eclectic bunch, with each adult member specializing in a specific science, field of learning or expertise. Why Why-Keteer Roll Call: 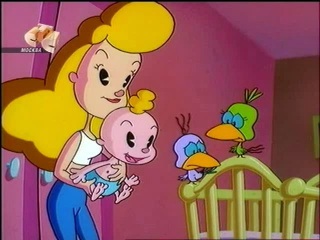 Dad Max: Technology and Electronics (curiously, Max was the only family member who ran through his segments without the aid of any partners, except for Victor, of course, or sidekick pets) 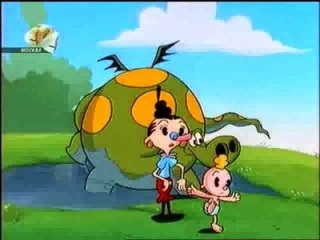 Uncles Micro and Scopo: Biology of the Human Body (FTR, Micro is the short dude in the 10-gallon hat, Scopo is the somewhat goony looking big lug in the Polo shirt with the Popeye forearms) 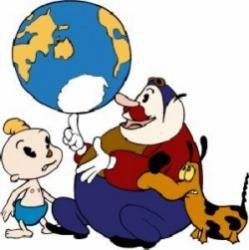 Zygo the dog and Grandpa Matik (together their names spell out the word ‘zygomatic’, because….clever??): Astronomy and the Universe.
Here’s a little taste:

Well, all right then.

The Why Why Family never went beyond 26 episodes, and in retrospect, it’s not hard to imagine why. For one thing, the show was syndicated; many of the local stations that carried it (including the ones in my area) aired the show insanely early in the mornings opposite the Farm Report. 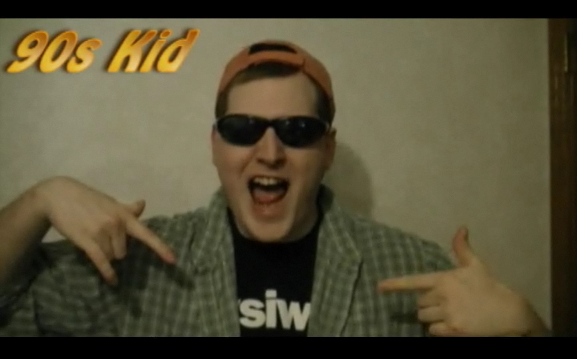 “DUUUUUDE! The toons of the 90’s were righteous to the extreme! BUST IT!”

…And The Why Why Family was neither of those things. The show wasn’t ‘hip’ or ‘cool’ by any stretch, in fact, it was almost radically square. There were no hip teenagers on the show: except for Victor, the family members were all adults with various degrees of learning, 2 of them elderly adults. The series’ art style was also notably retro: the cast resembled 1930’s cartoon characters (only in color), with Mickey Mouse style white gloves and Pac-Man dot eyes, and conventions like talking animals and inanimate objects suddenly coming to life with no explanation of why or how. The show’s style was also not edgy or extreme, leaning strongly towards gentle slapstick, squash-and-stretch physics (characters could get flattened like pancakes and just reform themselves an instant later without a scratch),  corny retrofied music, groan-inducing puns and silly sound effects. Each characters’ segments were book-ended by individual title cards (ex: So-And-So Character in “Such-And-Such Pun-Filled Title”) and even “The End” title cards, something you almost never see on cartoons these days.
While The Why Why Family was a bit corny (OK, a lot corny), at the same time, I can’t bring myself to dislike this show. Having revisited this show, I actually enjoy it in an odd way. It was silly, but a fun and harmless kind of silly. I did think it was kind of cool how each character represented a particular field of science and learning (science geek here), I loved that kooky house of theirs, and I must admit to having a bit of a mom-crush on Vanilla at the time; with her big blond hair and midriff top, she looked like a NASCAR racer’s trophy wife. Plus, one of their pets was a fracking dragon. A talking, shape-changing flipping DRAGON. I just can’t hate on a show with that. I kind of wanted to have seen a side episode which showed what these guys did when they weren’t doling out lessons; oh well, there’s always fan-fiction.
So here’s to you, Why Why Family. One things for sure: in a time where most cartoons were assembly-line carbon copies of one another, The Why Why Family was a red-blooded original.