It’s Autumn again, and so begins many of the Autumn traditions; raking the leaves, harvest festivals, pumpkin chunkin’, and Cartoon Network seems to be partaking in what would seem to be a fall tradition of their own: suddenly pulling a series on the network’s DC Nation program block from it’s schedule.

Yes, that’s right. This week, Toon has removed DC Nation’s latest animated series, Beware the Batman from the lineup, just like it did last year with Green Lantern: TAS and Young Justice. Toon claims that BtB will return to the lineup in January, but I think that we all know what this means.

In Beware the Batman‘s absence, Toon will be filling the now vacant half hour with another episode of Teen Titans GO!, thus making TTGO! the only thing airing on the block outside of the shorts. Not surprisingly the internet message boards have since lit up like Christmas trees by fans expressing their disgust over Toon’s decision. As always, I’ve seen the inevitable post claiming that “Cartoon Network hates its fans!” “CN has so much contempt for us!” To this, I say , to borrow a catchphrase from ESPN, “C’mon, man!” Does anyone honestly believe that Cartoon Network’s executives are a bunch of melodrama villains with black silk top hats and handlebar moustaches who clasp their hands in fiendish glee as they yank off TV shows just to make the fans at home cry?

“Nyeh-heh-heh! That’ll give those couch potatoes something to chew on besides their breakfast cereal!” 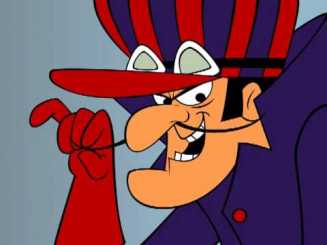 “Yes! Score another point for Team Evil!”
***************************************************************
I don’t believe that Cartoon Network does what they do out of spite. However, at the same time, I can’t deny that Toon does indeed treat it’s comedy cartoons better, primarily because they get higher ratings and don’t cost as much to produce than the action cartoons do. Case in point, let’s take a look at Teen Titans GO! as opposed to the other shows that have aired on DC Nation. TTGO! doesn’t premiere on Saturday mornings; it premieres on Tuesday evenings along with Toon’s comedy premieres and gets encores throughout the week, again not as part of DC Nation. Beware the Batman, Green Lantern: TAS and Young Justice, by contrast, had no encores and were not so heavily promoted by the network. And now, with DC Nation airing 2 back-to-back airings of TTGO!, the block now looks like a joke. Why even run TTGO! as part of DC Nation at all? I personally like the idea of the shows on a particular program being exclusive to said block.
****************************************
Much of the logistics and reasoning behind Toon’s indifference to action cartoons we’ve already covered back in earlier article, “Bringing Action Back”, so there’s no need to repeat myself here. I hate to sound like a broken record, but I feel I must once again state how I feel that a large part of the problem lies with Toon only getting 2 hours of prime time before morphing into Adult Swim at 10 PM. 9 PM weeknights could easily be devoted to action cartoons, if Toon would just push AS back to 10 PM or even 11 PM.
***************************************
I can understand why fans are up in arms about this latest development, but as for myself, I really can’t feel too bad about Beware the Batman going on hiatus because I saw it, and when all is said and done, BtB was just another Batman cartoon. BtB wasn’t terrible, but it was nothing to write home about either. Honestly, I liked Batman: The Brave and the Bold more, and even though Toon didn’t treat TB&TB very well, that series at least got a couple of seasons. I mean, we’re long overdue for a Wonder Woman animated series (and a movie also, for that matter), and we’re currently in the wake of Man of Steel and right on the verge of Superman’s 75th Anniversary and Warner Brothers Animation makes yet another flippin’ Batman cartoon? What the what?!?
********************************************
So what’s next for DC Nation? No plans have been revealed just yet, but fans have been pretty vocal about that as well. One poster on a message board suggested sarcastically

“Next they’ll make a wacky, kiddie sitcom version of the Super Friends! Ha-ha!”

Ah, yes. That remark is so sharp that you run the risk of cutting yourself, but I have to say this: If DC and WBA were to actually make a show like this and if said series were well written, well executed, entertaining and funny, I would definitely watch it. First, Cartoon Network’s target audience is kids 6-14, and kids love wackiness. They eat it up like free pizza. A comedy focused take on the Super Friends would completely fit in with the audience that the network is targeting right now. Second, like The Brave and the Bold before it, such a series could be an effective way of introducing the less celebrated characters from the DC universe, the ones who aren’t nearly popular enough to get their own series, to younger viewers. And the more learned viewers would likely be curious and research these characters in order to know more about them. This could conceivably be a good strategy for the studio and for the network. I would watch the heck out of a show like that if was done well. Just putting that out there.

“That would actually be a good idea, so sarcastic remark fail!”