Really? Well, if you go by the jokes, riffs and barbs of comedians and cartoon writers, you’d think so. Take the scion of Atlantis, Aquaman: 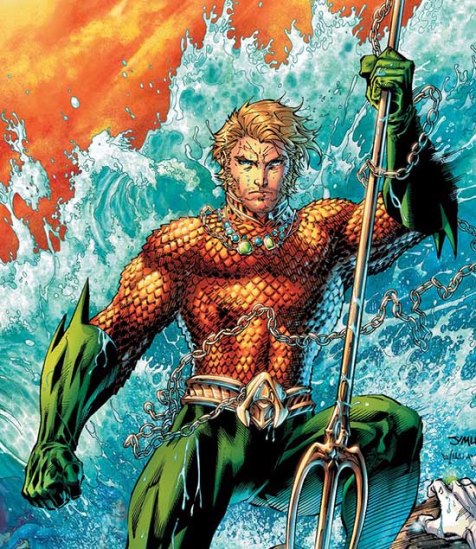 “Yeah, I’ve done plenty of sighin’ in Atlantis too.”
****************************************************************************
Here it is, 2013, and still the only way stand-up comics and the writers of Robot Chicken can think of to make Aquaman funny is to chortle, “Hur-hur. Aquaman’s lame. He’s a pansy who can’t fight, and his only superpower is talking to fish.” Seriously? The character has gone through numerous revamps and reboots, and people are still harping on the “Aquaman is useless” trope?? I get that many people base their opinion on Aquaman on the way he was portrayed on the old Super Friends TV show, where they downplayed his super-strength since they wanted Superman to be known as the strong one, and of course BS&P wouldn’t allow his to brandish his trident because they apparently were worried about kids on the playground stabbing each other with tridents, and of course, NO Super Friend could ever be shown punching anyone who could bruise, bleed or punch back. But come on, Super Friends was 40 years ago. Get current. Learn a new tune, already!
FTR, here’s a list of Aquaman’s current abilities:

Aquaman’s most widely recognized power is the telepathic ability to communicate with marine life, which he can summon from great distances. Although this power is most often and most easily used on marine life, Aquaman has at times demonstrated the ability to affect any being that lives upon the sea (e.g., sea eagles), or even any being evolved from marine life (e.g., humans). As per the 2011 DC continuity reboot, Aquaman’s telepathy has been greatly downplayed: acknowledging that most marine life doesn’t possess enough intelligence to carry a meaningful telepathic communication, Aquaman is now stated to simply add compulsions and needs in the mindset of aquatic life, compelling them to do his bidding by a subtle altering of their midbrain.

Aquaman has a number of superhuman powers, most of which derive from the fact that he is adapted to live in the depths of the ocean. He has the ability to breathe underwater. He possesses superhuman durability high enough to remain unaffected by the immense pressure and the cold temperature of the ocean depths, this also makes him tough enough to be invulnerable to machine gun fire. He also possesses superhuman strength. He can swim at very high speeds, capable of reaching speeds of 10,000 feet per second and can swim up Niagara Falls. He can see in near total darkness and has enhanced hearing granting limited sonar.

However, one point of interest regarding the Aquaman rhetoric can be found in the form of Aquaman’s sidekicks, the Aqualads, Garth (Tempest) and Kaldur’ahm. In addition to possessing the usual string of Atlantean abilities, these stud-muffins can also perform acts of aquatic sorcery: making water constructs and weapons, forming water into ice and gaseous forms, etc. This begs the question: why didn’t DC just give all Atlanteans hydrokinetic powers from the get-go? If Aquaman and the other Atlanteans were water-based sorcerers, there may never have been the string of “Aquaman is lame” jokes.

Let’s move on to another water-based superhero who has received more than his fair share of abuse from comedians and cartoon writers: Zan of the Wonder Twins.

Like Aquaman, this guy has been the butt of jokes for decades now. The typical mode of thinking is, “Jayna’s power is cool since she can turn into animals, but Zan’s power is lame because he just turns into water”. Even the Twins’ parent company makes fun of Zan:

Come on, now. Are we all really that short-sighted? Let’s explore the true nature and extent of Zan’s power, shall we?

Zan can transform into water at any state (solid, liquid, gas) and add to his mass by incorporating water in his immediate area. In the case of becoming solid ice, he can also become any form he chooses, from a 5,000 foot humanoid ice giant to a cage for a criminal to complex machinery (such as a jet engine, as he did in the episode “Eruption”). He changes into a gelatinous form at one point. On another occasion, he transformed into liquid nitrogen. In addition, he can transform himself into atmospheric disturbances (usually very localized) involving water, such as a blizzard, a monsoon, waterspout or a typhoon. In the comics, the Twins’ powers were more extensive and Zan could transform into things like ice monsters, hurricanes and demonic looking sentient whirlpools. Beaten by a sponge? I think not.

There are no useless characters; only writers who don’t or can’t think of formidable or creative ways to use them. There’s absolutely nothing wrong with Zan’s power. He just needs to be under the supervision of someone who can properly utilize it. Water can be unyielding, imposing and even deadly. The moon’s gravitational pull is controlled by the tides, lest we forget. And I’d be remiss if I didn’t mention this water-wielder: 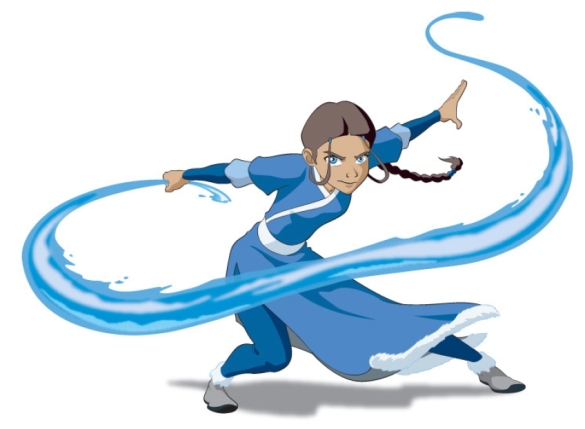