The Looney Tunes Show: Adieu at 52

It looks like Bugs, Daffy, Porky and company will get to chillax on the beach for a little while longer. According to Supervising Producer Tony Cervone, The Looney Tunes Show has ceased production. There isn’t going to be a third season of the show. The remaining episodes will begin airing on April 23rd, but after these have been burned through, TLTS will not be making any more episodes. It’s done.

‘Fraid not. According to Jessica Borutski, Petunia will appear on the show in one of the upcoming remaining season 2 eps, but those who were waiting to see Porky finally get a full-time girlfriend and Petunia join the cast as a full-time regular will have to settle for fan fiction.

Let’s get our terminology straight: This isn’t a cancellation, because Warner Bros. never had any plans for TLTS to go beyond 52 episodes. According to Cervone, the idea was for the show to keep the Looney Tunes characters in peoples’ minds, but it was only supposed to run for 52 episodes and that would be it. 52 seems to be the magic number for Cartoon Network/WB original series: 52 episodes is roughly Cartoon Network’s equivalent to 4 TV seasons (13 x 4 = 52) and 52 eps is considered by CN to be a sufficient amount for a series to run daily (although it’s worth mentioning that TLTS as well as Scooby-Doo: Mystery Inc., also produced by WB, have started airing daily before reaching 52 episodes), and the late Kids’ WB! toon Tom & Jerry Tales currently airs daily on CN, even though it only made 26 episodes). Basically, all of the current WB-produced CN shows are wrapping up, save for MAD (and that’s likely to get the kibosh by the end of this year), with new WB toons such as Beware the Batman, Teen Titans GO! and the upcoming Tom & Jerry Show slated to run after they’re gone. (It’s also pretty much a given that there will be a new Scooby-Doo series on the horizon, since Scooby is so popular and enduring that he’s harder to kill than crabgrass.)

My feelings on this? I’m more reflective than anything else. Yeah, it kind of sucks that there won’t be anymore LTS episodes, but in retrospect, I have to admit something: I’m one of the biggest Looney Tunes fans there is, but I didn’t love The Looney Tunes Show. 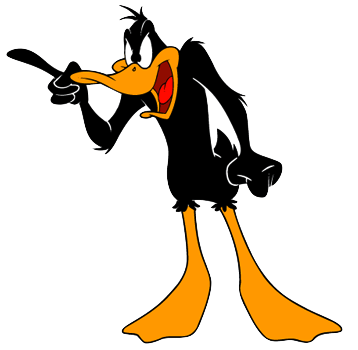 “WHAT?!!?? Blas-pheemer! Eggth Benedict Arnold! Thtone the heretic, I thay! Rack ‘im over hot coalth!!!”
**********************************
Now, don’t get me wrong: I liked the show. I just didn’t love it. I want to love a Looney Tunes show again.
Supervising producers Cervone and Spike Brandt have stated that the reason they didn’t try to flat-out copy or even directly emulate the shorts formula or style is because they didn’t think they could live up to it, and while I both understand and respect that, at the same time I have to confess that while TLTS did indeed have some funny moments and was an ambitious undertaking, overall the more laid-back style of TLTS just didn’t work, and it didn’t resonate well with LT purists, though kids seemed to enjoy it. Forgive how jerky this is going to sound (it already sounded jerky in my head) but if nothing else, TLTS can be used as a textbook example of what works and what doesn’t work:
And then there’s Lola. Wow. I can’t think of a more polarizing cartoon character in recent memory than this show’s version of Lola Bunny, except maybe Scrappy-Doo. Brandt and Cervone claim to have never seen Space Jam and therefore had no exposure to the shoehorned in, Mary Sue version of Lola and wanted to do their own take on her, and to their credit, TLTS’ Lola was indeed loony, but oh, the hate she received from viewers. I’ve heard her called everything from a stereotypical ditz to an offensive female throwback and a stalker. Now, I didn’t hate TLTS Lola, but maybe it wouldn’t hurt if in any future projects the writers made her a little less spacey, perhaps they could meet somewhere in the middle with Lola: not quite the paragon of Girl Power perfection, but not quite the crazy birdbrain either, sort of a happy medium between the 2.
Right now, there aren’t any new Looney Tunes TV projects in the works, but if the upcoming LT ‘reboot’ movie (assuming that’s still happening; I haven’t heard any recent updates on that) does well, a new LT show is sure to follow. Hopefully, whoever’s in charge of said series will take what happened with TLTS into account and this will help them create a show which pleases the vast majority and hardcore LT fans like myself will actually love, not just like.
Also, please continue to use Tina Russo. Tina’s awesome.